skip to main | skip to sidebar

In contrast to the bustling hell that was Beijing's train station, the train that we took to Qingdao was a highly efficient mechanised beast. Fully reclining seats, complimentary mineral water and sliding glass doors were the order of the day. We pulled up to Qingdao station at around 10 at night and grabbed a taxi up a series of hills to the old observatory where our hostel was situated.

We were told by the receptionist that our reservations had been screwed up so we would have to stay in the hostel's most basic lodgings, everything else was fully booked. The receptionist grabbed a torch and lead us down a series of labyrinthine, outdoor, concrete steps (with no banisters) in almost complete darkness. The 'room' was situated at the very bottom of a dark path and occupied half of a semi-subterranean breeze block building the entrance of which was a huge steel door which the receptionist seemed unable to operate due to the rust surrounding the lock. Upon finally entering the room we were instantly met with a fairly challenging, two pronged, olfacto-visual attack. On the one hand we could see 18 beds crammed together into a room - although the term bed is a little kind - burlap sacks nailed to wooden benches is a little closer to the truth. What little paint remained was peeling off the walls and dank silken leftovers indicated that even the arachnid residents had given up hope of pursuing a worthwhile life in these surroundings. In addition to this there was an overwhelming smell of human excrement, the reason for which became immediately apparent upon opening the door to our 'en-suite' facilities. In lieu of a toilet there was a soiled pit in the ground, a pit which, rather efficiently, not only served to carry away fecal matter but also the water from the shower which was located directly above it. Never before has not showering made me feel so clean.

In spite of all this, the hostel made up for its lack of room based amenities with its awesome rooftop bar. It turns out that the hillside locations of observatories make for awesome views onto the cities that they overlook. This photo gives you an idea of how outrageously sweet the hostel's location was: 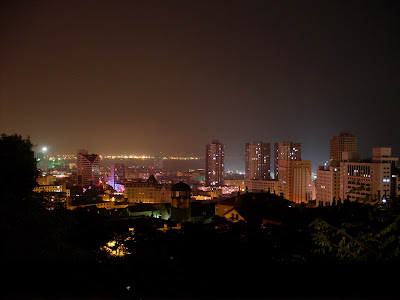 To top things off, the bar had seating that appeared to be made out of the World's most luxurious beds, huge, foot thick sponges which were perfect for crashing out on, should burlap sacks on wood not really be your thing.

On our first full day in Qingdao we wandered about with not much of a plan at all. We saw a series of German buildings, including a variety of incongruous churches, all remnants of German occupation. The town is primarily famous for its main export Tsingtao (Qingdao spelled the old fashioned way) beer, which was created by German occupants, desperate for a fix of their favourite hops based drink. The local method of serving is somewhat different to that found in Germany - or pretty much anywhere for that matter - as street vendors prefer to pour fresh beer into giant, heavy-duty, plastic bags the majority of which become filled almost entirely with foam. We saw more than one person walking down the street with a 2 kilo sack of beer, the side of which was pierced with a straw while the contented owner guzzled back the frothy liquid inside.

This, however, was by no means the most unusual sight we encountered during our time in Qingdao.

Right on the pavement, in the middle of the city, huge rows of fish split open and left to dry amongst old pieces of chewing gum, chocolate wrappers and, most deliciously of all, dog shit.

Like some fundamentalist Christian's rapturous fantasy, we saw a pair of shoes who's owner had seemingly disappeared mid stride, stood before a pedestrian crossing. 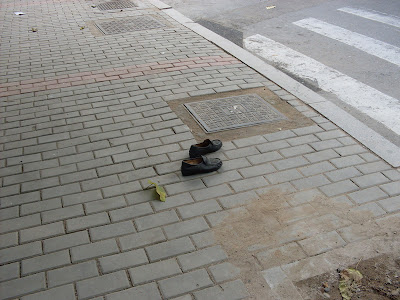 Whilst standing in the queue to buy a ticket to the Qingdao aquarium, a seemingly endless series of ever more irrelevant shops punctuated by some token fish tanks - the first sold dried fish products (which we were in no hurry try) and stuffed animals of sharks, the last resorted to selling tea and model ships in order to empty the hapless patron's pockets of their last remnants of cash- a juvenile praying mantis somehow appeared on my bottle of coke. A bottle of coke which was in my hand, far from the ground or any trees which could have housed such a creature. 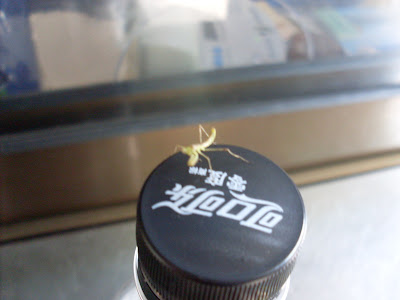 By some stroke of quasi miraculous luck we managed to bumble our way to a bustling food market, serving a range of tasty foods from throughout China to all the locals.

There we were first greeted by 8 Muslim men in full on Muslim clothing selling kebabs and naan bread whilst dancing with passionate and jubilant force to European, hardcore techno. Fair enough, considering the kebab vendors next to them had a man with inexplicably large hammer, hitting dough whilst topless save for an incomprehensible red oval - also to music, as their marketing tool. 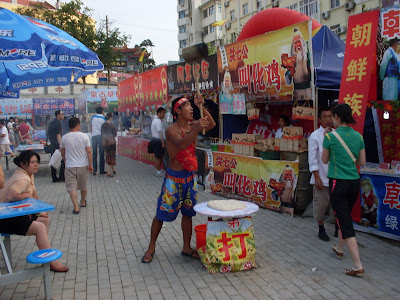 If I were to tell you that there was a dog on one of the diner's tables you'd be forgiven for thinking that it was the unhappy ingredient in some Chinaman's delicious lunch time feast. What actually happened was this: a woman decided that rather than eating alone, she would take her inexplicably small and stupid looking dog to lunch, holding it in her left hand while she fed it with the chopsticks in her right. Of course it's altogether possible that she was merely taking the dog out to fatten it up with her favourite food with the idea of eating some weird and extravagant favourite food within another food amalgam at a later date. That way we're both right. Hooray. 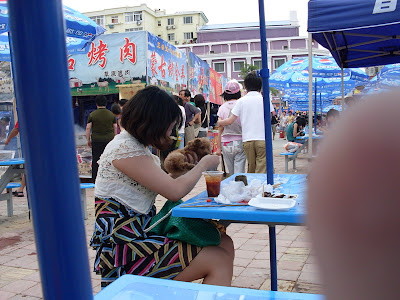 We didn't tuck into a platter of piping hot canine parts (on this occasion) but we did still manage to rustle up a rather more interesting concoction than what one might usually enjoy for breakfast. We started off with stir fried aubergine with peppers and onions (top) descending rapidly into boiled starfish (left) and pan fried silk worm larvae (right) served with a Gatorade bottle cap filled with a dried spice dip (centre). 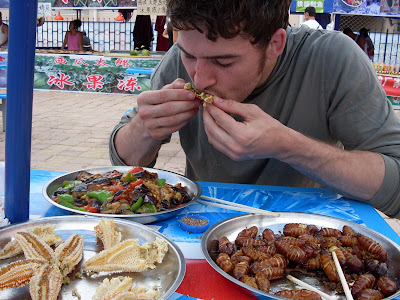 After this nutritious breakfast we felt ready to take on the World and were sure we'd be able to face anything that Qingdao could offer us. We were wrong, we could have eaten the heart of Pegasus served on a bed of mandrill faces and not been ready for...

Unusual sight 7 involved one of those moments in life where a combination of disbelief and unpreparedness leave you unable to truly comprehend the magnitude of what you have just witnessed. As is clear from the photo taken at the rooftop bar, Qingdao is a large and vibrant city which houses a number of skyscrapers and the various financial institutions and high level shopping boutiques that come with them. It is in the heart of the commercial district where we stumbled across an unusual couple, firstly there was an elderly Chinese gentleman wearing shorts and a simple shirt along with a plain looking hat, a man that could easily blend in at any seaside town. That is, if he wasn't travelling with his unorthodox companion; a boy of about 12 or 13 in a plain white t-shirt, unassuming enough save for the fact that he was naked from the waist down. A sight which George described as "a party sausage sewn to a lychee".

That's right, at some point in the day the child's parent or guardian had decided that this boy was ready to leave the house. Its not like this was some destitute kid surviving on the streets either, the fact he was wearing a clean, new t-shirt was an indicator that his family could afford clothes, it's just that they had decided to funnel all of their resources into clothing that all important torso region of the body whilst leaving the lower body exposed. The weirdest thing is that nobody walking down this busy shopping street found this unusual, the kid didn't look happy or sad to be devoid of trousers he just looked oddly at peace, maybe this aura of authoritative, calmness is what made his parents allow him to leave the house that way. "Hang on you forgot your shorts", "No mum, I won't be needing those". 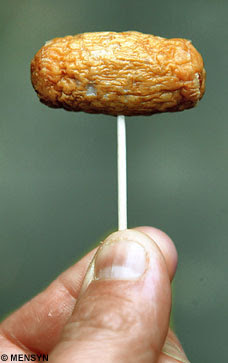 It was with the memory of Unusual sight 7 fresh in our minds that we boarded our ship to Korea, a short 24 hour voyage from Qingdao to Incheon. We would be leaving the country of China behind although only for a few weeks; plenty of time, we hoped, for the people there to purchase a set of rudimentary britches.